Orientation 2016 to me was a myriad of colours – filled to brim with excitement and nostalgia. Being a part of the Year One Orientation committee was a great way indeed to weld my entire NUS High experience together, for it brought me back to the beginning. After months of ardent discussions over Utown dinners, and intense planning, Orientation 2016 arrived in a blink of eye, and ended even faster.

Day One was the dawn of something new for 170 kids, and for me as well. It was the first time after all, I was an OGL for an entire class – and despite being a tad bit nervous, the feeling of excitement overrode it. I had the great opportunity of leading the 24 students from M16101 with my co-facilitator Syhami.  The nervous, animated faces filled the concourse with lively chatter. After that, everyone made their way to the hall for Mrs Lee’s welcome address, and for our introduction to the NOVA storyline. As the four creators, IRIS and NOVA11 were introduced, along with their missions, the entire Year One cohort were buzzing, discussing the storyline and their tasks at hand. This was followed by a mentoring session with their respective mentors and the level address by Ms Ivy Koo, who greeted her new cohort with great zeal and enthusiasm, that made the new students feel just right at home. As Ms Koo concluded her welcome address, the Year Ones begun their first activity for orientation – their school tour.

The school tour was not your usual OGLs introducing various places within the school at a leisurely pace. Instead, the school tour was carried out in an amazing race style, where classes were given clues corresponding to key places in the school, and had to complete stations at the said location to earn their next clue. My class was quick to figure out their clues, and eagerly completed the tasks. The most memorable station for me came with one of the more harder clues: “An anagram of Marines + A place with 4 walls + [ (1234 + 3456 – 4699) x 0 + √361 – 17]” Without a calculator at hand , they were able to decipher the clue and tell us it was Seminar Room 2 under less than a minute. Over at the Seminar Room station, they were required to fold paper stars, and fan them across with mere paper plates. What stood out to me the most was the camaraderie between students who had barely known each other till a few hours ago.

After lunch, we led the students to the Theatrette, where we showed them our traditional Dummies Guide Video. This time round, one of the commanders of the NOVA Ship, Matthew Chong, gave a series of important pointers and helpful tips about adjusting to NUS High life, in the quirkiest manner possible. The entire cohort was tickled, and surprisingly, they were able to remember all the pointers! After this, the Year Ones learnt the lyrics to the school song and after 2 tries, the entire cohort was singing the school song like a choir.

Day 2 began with a problem, for it was revealed the NOVA Spaceship had met with an engine failure. The Year One students were to head out to the Clementi town, and do tasks to gain materials to build their very own engines to replace the faulty one.  Our main goal of this activity was to orientate the Year One students around the Clementi area. Despite the hot weather, the students kept their spirits high, and even insisted doing side tasks along the way to their stations to earn extra currency to purchase materials. The funniest side task my class had to do was to cluck and squawk like chickens from one station to the other, and despite the strange looks 101 got from the public, they kept their heads up high, and their clucking and squawking strong. After navingating their way through Clementi town, students headed back to school to rest over lunch, and built their engines. All the engines were innovative, and classes gave very scientific principles behind their design of their engine – I remember phrases such as TurboChargers, Valves and Spark Plugs being tossed around, and I was simply amazed at their mechanical knowledge.

Day 3 was designated to be House Time, for the Year Ones to get to know their housemates and house leaders. The storyline made it seem like all the houses were sabotaging each other, and the Year Ones took this really seriously. When groups of students from different houses met, they contested each other with loud and strong house cheers, and it took awhile for us Student Leaders to settle all of them down. The task at hand was to get as much fuel as possible, so each House, or Planet, rather could rush to Ignotus. The level was split into their Houses, so as to earn materials which would later be used to create their Celestial Sources, their fuel.  From solving Lateral Thinking Questions to playing Contact, the Year Ones completed the tasks quickly and efficiently, earning a lot of materials. They also had to go out periodically in small groups to find more materials, and if they were to run into other groups from other houses, they were to wager their items and battle it out.  Finally, after they had earned their materials, they had to make the Celestial Sources and fill up their fuel tank, all while guarding it from potential damage from rival Houses. As all the other Houses met, the cheering contest began again, as Houses fought to affirm their position as the best (and loudest) house. All the Houses managed filled their tanks completely, and the activity ended on a high note.

That marked the end of Year One activities, and it was time for the finale. Seeing the Year Ones to warm up to each other and NUS High as a whole,  was really the best part of being a Student Leader for me. The Year Ones brought me down memory lane to when I was Year One myself. Thank you M16101 and my co- facilitator Syhami, and of course my entire Year One Orientation Planning Committee for making the start of my last year in NUS High School an unforgettable one. 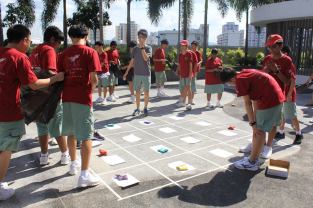 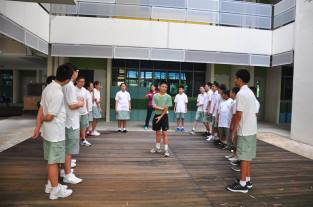 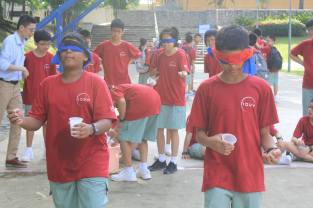 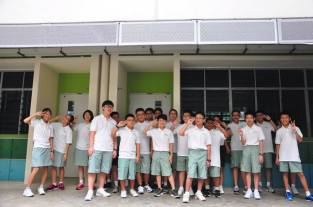 Finding the way around Clementi