Orientation. The casual word associated with anticipation, fear, and (maybe a little bit of) dread, coinciding with ill-fated New Year’s Resolutions. Nonetheless, Orientation 2016 (or 2k16 as young people call it nowadays), had something for everyone.

On the morning of 4th January, the 15 year olds awkwardly lined up with their new classes, looking around anxiously for familiar faces to play Hearthstone with. Over the course of the next 3 days, we saw the Year 3 level slowly getting warmed up and putting their handphones away to actually interact with their classmates!

On the first day, they had internal activities at various stations, followed by a mass activity. At one station, classes had to tie their shoelaces together and race against time (and an opponent) to complete 50m around the track while singing. Mentors also joined in with Mr Hariz Tan and Mrs Soong racing against each other while singing Let it Go. After the stations, classes had to lift up their pistons and keep it 15cm above the ground for as long as possible while trying to bring other classes’ pistons down. We saw some creative (or not?) classes use their bags and jackets to build a fort for their pistons and claim to have “won already so can we go and lepak now???”

The next day, the Year 3s went to Bishan-Ang Mo Kio Park, and met our pals from Catholic High and Waffles, oops, I meant Raffles Institution, there as well. Some enthusiastic students and Orientation Group Leaders (OGLs) took it upon themselves to say HI CAT HIGH and even took wefies with their OGLs! At one of the stations in the park, pairs of Y3s had to repeat the same answer to the same question at the same time, which led to some pretty interesting answers – “What’s the first line of our school song?” “Potato potato” “Who’s the best looking boy in your class?” “Mrs Soong!” After their stations, the students had to take down a structure built by the OGLs using soaked sponges and water balloons. “THIS IS SPARTA!!” screamed some students and starting throwing their sponges around. We still don’t know if they were aiming at the structure or at the OGLs, but everyone was soaked. It was certainly a wet and wild day!

On the last day, the students were split according to their houses and had an internal house-based activity. Students quickly got acquainted with one another through ice breaker games like charades and “husband and wife”, with plenty of laughter and running around. At one of the stations, houses were pit against each other to pass balloons to their captain, and some had to stand at the side to solve puzzles to get balloons. We have no idea what these the Year 3s do in their spare time, but the House Leaders ran out of puzzles halfway through the session! All this camaraderie only raised house spirit exponentially with students enthusiastically cheering, laughing and clapping.

The three days of orientation were certainly fruitful, with many saying they “rate it a sold 5/7 m8”. Although the hype after orientation may simmer and die down, we certainly hope their spirit doesn’t!

Pose for the camera! 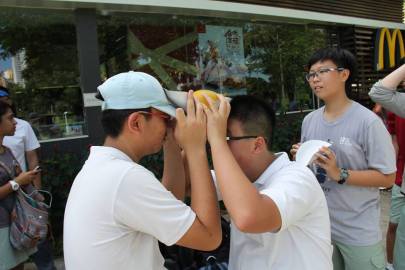