As the white balloon started making its rounds around the Science Centre convention hall, excitement grew and school cheers heralded the beginning of the awards presentation ceremony.

The Singapore Science and Engineering Fair (SSEF) is an annual event showcasing math, science and engineering research projects of aspiring students from all over Singapore. This year, over 300 applicants made it as finalists, and were invited to present at Science Center Singapore. The range of projects covered diverse topics, and there was much to learn from all the projects in the convention hall.

The doors were open to the public on the second day, and student presenters could be seen mingling and talking to students from other schools and their own. There were also many parents, teachers and students that came to learn from the finalists and their project presentations, and support the students as they prepared for the final awards presentation. The Fair was filled with nervous energy as students presented to the general public while waiting for the awards presentation in the late afternoon.

When the awards presentation began, a crowd formed quickly behind the (in)famous white balloon that stopped at booths that won merit, bronze and silver awards.Still, energy in the hall ran high as students cheered and clapped for the awardees, who were presented their respective plaques and photographed.

Finally, the special and gold awardees were announced, bringing the tension in the hall to its highest. More than forty special and gold awards were given out, and NUS High School students did the school proud by winning a total of 6 golds, 1 silver, 4 bronze and 2 merit awards. One of the projects awarded gold from our school was selected for the International Science and Engineering Fair (ISEF), one of the most prestigious international science fairs with over 1700 students participating yearly as the best projects from their region, state or country.

Marion of M16607 shared: “The process was really nerve-wracking, but we received a lot of constructive comments on our presentation.” Chermaine from Year 5 also commented that revising and preparing for her SSEF presentation helped her understand her project better.

Congratulations to all awardees and finalists! 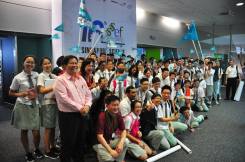