Melodic laughter filled the morning air as students and teachers locked their gazes on the burning sun through their solar glasses. Through the dark lenses, the orange seemed to glow even brighter, a stark contrast against the black. The grandstand was milling with students actively chattering and snapping the occasional picture, savouring and keeping the moment. The concourse, too, was abuzz with activity, with booths and equipment set up for the eclipse.

Earlier that morning, the Astronomy Club members had taken the special effort to prepare and set-up the telescopes and cameras, capturing the eclipse from the very start. The queue for the viewing telescopes, a William Optics ED80 with a magnification of 21.8x and a Celestron Nexstar 8SE with a magnification of 63.5x, stretched across the concourse as enthusiastic students peered curiously through the lenses, hoping to catch a clear view of the eclipse in action. To capture and broadcast the eclipse, the astronomy club used a Celestron C5 telescope and a Nikon D3300 camera.

The Quanta members, too, prepared booths to educate and entertain the rest of us.

To get the school hyped up for the solar eclipse, Quanta also prepared a ‘Pinhole Camera Contest’ for the Years 1 and 2. The competition was well-received by students, with many students coming up with innovative ideas and designs. One of them was Leticia Tok from Year 1, who made not just one, but three pinhole cameras from different materials.

“Pinhole cameras allow people to view indirect images (of the sun) without getting blinded, allowing more students to view the solar eclipse without using the traditional solar viewers,” Nicholas Quek, a Quanta member, explained to us, adding that the response to their booth was excellent.

Besides that, the Robotics Club also constructed a display showcasing how a solar eclipse happens. The display included 2 separate mechanisms, showing how the moon circles us, while the Earth revolves around our source of heat and light, the sun. Though seemingly simple, the display was constructed very intricately, with many gears and wires fitting everything together, and it was easy to see that much effort was put into it.

One might argue that so much effort for an hour-long eclipse might seem a little excessive. However, living up to our reputation as a math and science school, we all enjoyed viewing the eclipse, and all the fuss was definitely justified. The last time Singapore witnessed a solar eclipse of this scale was in 1998 – before many of us were even born. The next solar eclipse we will witness will be in 2019 – an annular eclipse.

An annular eclipse happens when the moon is too far to fully cover the sun, leaving a ring of blazing fire – I certainly hope I have the fortune to witness it along with the school in 2019! 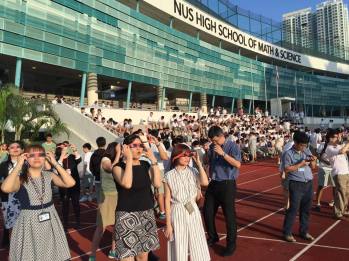 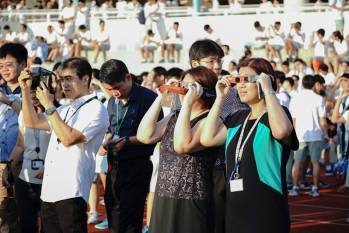 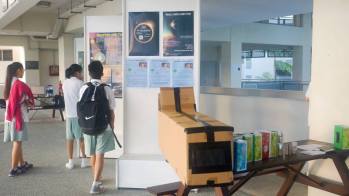 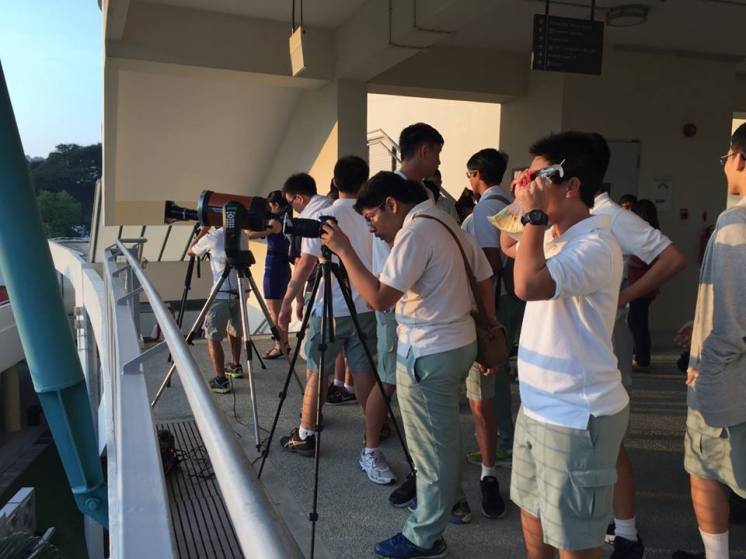