By Cherry Nwe and Yu Borong

The CCA Fair opened with a colourful cacophony of performances put together by the Performing Arts CCA, starting with the Dance Club’s captivating performance. The Dance Club members showcased many genres of dance to a remix of three pop songs that had the audience clapping along.

Delivering a more subdued musical number was was Gamelan, a stark contrast from Dance. A banner strung across one of the instruments, reading ‘We play heavy metal!’, condensing Gamelan’s fun atmosphere into a banner in a bid to persuade the captivated audience members to join their CCA.

Up next was Drama Club, which put forth a brilliant production titled ‘2 Reasons You Should Have Stayed Home Sick Today’. The familiar turnstile made an appearance, tickling those who have experienced the frustration of being stuck in it.

Following which, Chinese Orchestra gave a short lesson on the many instruments they had on display before launching into two beautiful pieces, the second of which genuinely captivated much of the audience.

Choir, not to be outshone, also delivered two songs, the fast-paced ‘Tap Tap’ followed by the slower paced ‘Irish Blessings’. The performing arts section was concluded by the ever-impressive School Orchestra with their elegant rendition of the school song.

The performing arts CCAs had certainly fulfilled their designated roles of convincing some new students to sign up for auditions, as evidenced by the students interestedly milling about the booths set up in the hall.

After they were released, the new students went up to the concourse, where the various Sports, Clubs and Uniform Group CCAs had set up their stations, each offering up different kinds of display and interactive activities to entice the Year 1s.

The NCC, whose members had donned their full attire, were under special orders to be loud, rousing and memorable. The Robotics Club had with their robots rolling around the place offering mini lollipops to students and parents alike, while the Media Club was busy clicking their cameras at all passer-bys. The Youth Flying Club offered simulated flying programmes while the Journalism club attracted word whizzes with their haiku cubes. The Astronomy booth attracted potential stargazers with their display of telescope while the Art Club captured everyone’s attention with their display of breathtaking artwork.

The CCA booths also gave out various tokens as per tradition – with sweets and bookmarks being the more popular choices, though there were also stickers from Netball, files and teddy bears from the Debate Club, pencils from the Journalism Club and buckets full of love from everyone.

The concourse was a mess, crowded with eager Year 1s interacting with students from other levels – negotiating and exchanging information for their respective recruitment campaigns. CCA Fair 2016 was definitely a resounding success! 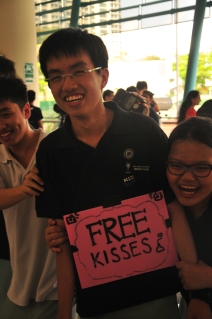 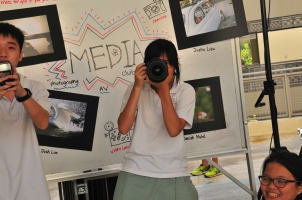 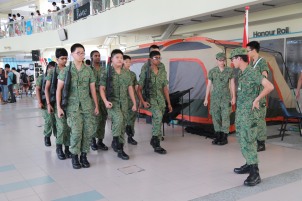